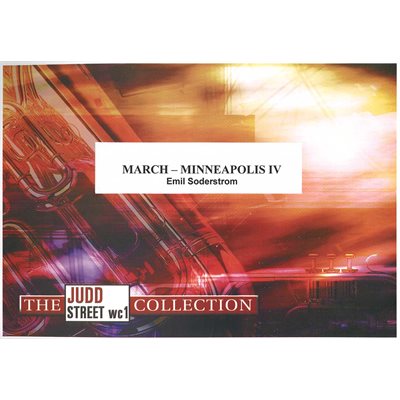 This march was the outcome of a request by the Minneapolis IV Corps to write a march to celebrate its 60th anniversary. One always expects a composition from the pen of Emil Soderstrom to be something attractive and worthwhile. This effort is no exception, for it indicates the master-hand, and there and there are novel touches which make the march interesting to listen to as well as to play.

Introduction — Although only four bars in length, the music here is full of detail. A good deal in the way of contrast and color is provided, and the harmonic resource decidedly palatable. Set a good tempo and watch the use of accents.

Section A — This, too, is unusual and possesses novel features. Bring out the points of imitation in the trombone and euphonium parts, and see that the forte-piano effects are observed. The upward-moving semiquaver figures for baritone and euphonium in the first-time bracket may prove troublesome at first, but capable players, with a little patience and practice, will soon master this. Keep alert also in the second-time bar where most instruments are employed on a syncopated figure.

Section B — Once again forte-piano effects are planned, and these must be observed intelligently. Bar 17 provides a surprise, for on the second beat the dynamic suddenly becomes forte for three beats. Bars 20 and 21 are also interesting with a novel rhythmic effect planned. Avoid over exaggeration here, or the effect will be anything but what is intended.

Section C This is a reprise of the first subject at letter A, until the fifth bar, where a development of the first-bar figure commences, which eventually rounds off this part of the march.

Section D — Without introduction, a smooth-flowing melody, allotted to flugel, solo and 1st horns, will be found most interesting to play, as well as to listen to. A special feature of this melody is in the part for euphonium which will be seen to be an octave lower than the horns. The various entries for cornets and trombones must be neatly negotiated and played with good taste. All other parts are on easy lines and will be read at sight.

Section E — This important episode will need special care and attention, for it is teeming with detail. The fifth and sixth bars again feature forte-piano effects for the upper part of the band, whilst the lower end have descending scale figures. At the conclusion of this episode, a repeat of section D is made.

Section F — The Army theme now appears, this being the chorus of a song composed by Senior-Major Kaleb Johnson, a former commanding officers of the Minneapolis IV Corps. See that this is brought well to the front. The melody is allotted to baritones, tenor trombones, and euphonium. The countermelody for upper cornets is interesting and will be found quite easy to play. This section is repeated and a new ending given which must be snappily played.