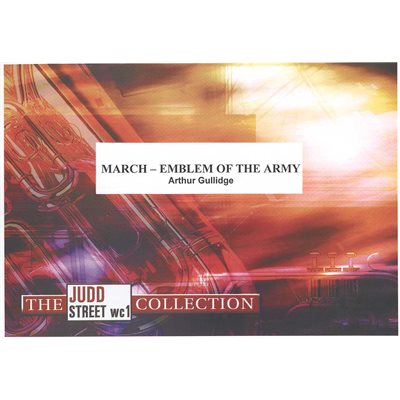 JSC Emblem Of The Army

The name 'Gullidge' still regularly appears on band programmes the world over, a tribute indeed to the usefulness of the contributions which the late Bandmaster Arthur Gullidge made to our music during his lifetime. It is interesting to observe that of his twenty-five published compositions for band, twelve are marches, and it is perhaps with this form of work that the bandmaster's name is particularly linked. Emblem of the Army was first published in 1967, nearly a quarter century after Gullidge's tragic passing during World War II, and continues to be a worthy addition to this list and possesses that proud swing and vigor so characteristic of a 'Gullidge' march.

Bands which excel in a good rhythmic style of playing should quickly sense the 'bounce' of the compound time prevailing throughout. Indeed, the full effect of marches like this can only be realized when this accuracy in rhythm is perceived. For instance, a careless approach could cause the very first bar to be distorted (even though a 'safe' unison) by hanging on to the tied notes a fraction too long and crushing the remaining to quavers into something less than their correct value. This common problem of simple arithmetic often arises at such points involving a tie. Let the beat be the arbiter, with note-values conforming to its regularity, whether those notes be multiples or divisions of the beat.

One of the features of section A is the alternate appearance of loud and soft dynamics. Exploit this and other similar instances in the march, but let the volume peaks be full, strong sounds, anything bordering on blatancy being discouraged.

The bass solo at C is an active one calling for unified articulation and quick, sure shifting by trombones. Here are more examples of the 'tied-note' problem refereed to earlier. Aim for a clean take-off in the bar before C; the five quavers forming the anacrusis to the full bar could sound scrambled if carelessly measured.

The trio section is longer than usual, the two versions of its principal melody being bridged by two other sections, one of which is the chorus, Lift up the Army banner, related of course to the title of the march. Keep the compound idiom in mind during this section.

Section G is the final version of the trio and requires playing in the customary atmosphere of firm finality. (view series guide)
Produced by The Salvation Army, SP&S, UK