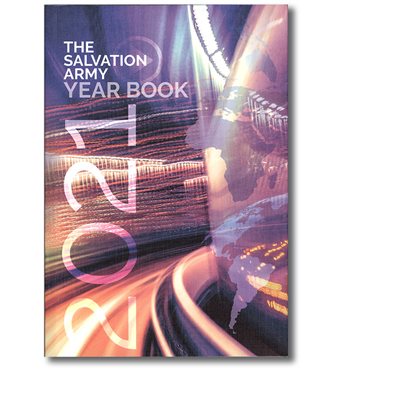 Unexpected 'tipping points' can sometimes distract and disturb the focus of people and be very disruptive to a movement such as The Salvation Army. The coronavirus pandemic quickly assumed its significant role, impacting us worldwide and leaving no one untouched. We quickly isolated, locked down and lived with one restriction after another. No doubt there was a moment – a 'tipping point' – where the Army had to choose to move in one direction or another.

We wish to honor and applaud those who refused to give up. The mission became pre-eminent as we moved online and spiritual ministry moved forward. We did not leave it there but rather pivoted toward people, many of whose pre-existing needs became more pronounced due to the pandemic. Social media bears witness via written word, picture and video to a Salvation Army undaunted, mobilized and creative in its desire to serve.

As in the past, this Year Book is a testament to the time in which it is written. You will catch glimpses of the Army in the midst of COVID-19 and though we have not yet arrived, we celebrate the clear and demonstrable faithfulness of God who fulfills his promise, 'And surely I am with you always' (Matthew 28:20).

Our hope is that history will record this time of COVID-19 as both a challenge and an opportunity. It should also record a narrative that captures courage, creativity and conviction, enabling a fortitude that results in sacrificial service. We are honored to lead an Army that remains steadfast in its determination to win the world for Jesus. The Call to Mission — Be Ready, Be Engaged, Take Responsibility — finds its relevance in the world as we acknowledge our vulnerability and our need of God.

I commend to you the pages of this Year Book. Let the pictures that attempt to capture our story of service inspire you. As you read the lead articles, know that these were chosen so we could consider and reflect on important matters. One such matter is racism. We have learned and understood much, but the journey is still before us. As international leaders, we call Salvationists not only to denounce racism in every form, but also to be actively anti-racist – speaking, standing and stating a God-view of his creates ones.

As you browse these pages, I pray that the recorded statistics and the programmatic profiles of our territories, commands and regions will be and encouragement, providing evidence of God's hand of blessing. He continues to enable the Army's mission, impact and growth. Even during the pandemic, doors have opened and opportunities have come. God does the impossible and continues to surprise us.

One of the privileges afforded to us as international leaders is being with and visiting, in person, Salvationists in our countries around the world. Such travel enables us to embrace God's Army and tell its story, but even though COVID-19 has impeded this we have virtually worshiped around the world, followed our mission progress and celebrated sacrificial service offered, many times at personal risk.

We still believe that an Army on its knees is a greater force for good than an army that carries the weaponry of the world. We join our hearts with yours, and together with Founder William Booth declare: 'I'll fight, I'll fight to the very end!'
May it be so!