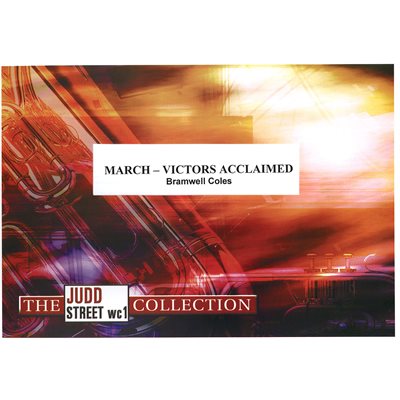 This march was written during the early years of World War II. In those dark days, people were supported by an ineradicable belief that somehow 'good will triumph over ill', with ultimate victory to those who went out unflinchingly to fight the evil thing. Writing in that mood, it was envisaged also that innumerable company of God's warriors who, having 'fought a good fight' went fresh from their triumphs to receive a crown of life.

Introduction — This brief two-bar introduction, opening in the key of G major, consists of a trumpet-like call by cornets and tenor trombones, answered in hearty manner by the full band; this sets the rhythmic pattern for the first subject. Notice the marks of accentuation on the first quaver of each bar.

Section A — This first movement is of spirited character and features crisp, rhythmic figures alternating with answering phrases of more sustained character. Give attention to the accented notes, which enhance the rhythmic figures in bars 3-4, 7-8 etc., and play these quavers quite staccato. There are some contrapuntal figures for solo and 1st horn, and 1st baritone, in these same bars and also in the second-time bracket; bring these out prominently. Give attention also to the figures for the bass end in bars 6 and 10.

Section B — In this second movement the music becomes more somber, and a plaintive note creeps in - victories are not won without tribulation! Play all this in sustained cantabile style, in direction contrast with section A, and keep well down to the mezzo piano at the commencement. The counterpoint for 1st baritone and euphonium must be very smooth hand full-toned. See that the swell in bars 18-21 is well observed by the whole band. From bar 23 commence to build up from the mezzo piano to a good forte in bar 27; the chord here should be big and full, and well held.

Section C — Now comes a reprise of section A; but at bar 40 there is a development of the rhythmic figure which brings a more definite sense of finality.

Section D — This short coda is build on the trumpet call heard in the introduction, with a bass solo response consisting of the rhythmic figure which characterizes sections A and C. Then the music works up in rising figures to the fine. For the first time through, however the fine bar is omitted, and the music becomes subdued as a modulation is made from the key of G major via C minor to C major.

Section E — The chorus of the writer's own song, Victors Acclaimed, forms the trio theme. It was especially written for this composition and appeared in The Musical Salvationist for March, 1942. This melody must be vocal in style, and it should move along with well-emphasized rhythmic pulse.

Section F — Watch the detail here carefully. The whole episode is built on the rhythmic figure which features in the opening movement. Make these figures whenever they occur very staccato. Notice that the first and third bars open mezzo forte only; there should be a touch of apprehension in these staccato figures, as if fearful of approaching danger. The figure for basses etc., which commences on the last quaver of the first and third bars, should be guilt well up to the fortissimo accented quavers for full band. The unison figure in the fifth and sixth bars must be bold and emphatic, the two final bars being full of vigor and confidence.

Section G — This full band reprise of the trio, with cornets and trombones taking the melody, should be instinct with the spirit of victory; picture victorious warriors marching home to the acclamation of cheering hosts. Keep the counter-melody by 1st baritone and euphonium well to the fore, so that it enhances the jubilant strain.