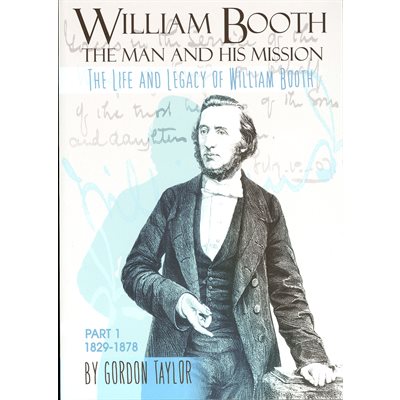 The Life and Legacy of William Booth 2 Book Set

William Booth was born into a middle-class family, but did not aspire to wealth or prosperity and amassed no personal fortune. He adopted a simple lifestyle, lived in modest but comfortable surroundings, and worked tirelessly for others, rather than himself. During his long life, he played many parts: the willful youth — the reluctant student — the pawnbroker's apprentice — the passionate convert — the Methodist minister — the ardent lover and father of three sons and five daughters — the mission superintendent. Thirty-four years after his conversion to Chris, he became the General of The Salvation Army a few months before his 50th birthday.

In thirty-four years as General of The Salvation Army, William Booth was a tireless evangelist, a world traveler and a social reformer. A legend in his own lifetime, his well-worn voice can be heard on gramophone recordings, and his distinctive features can be seen in photographs and on early cinematograph film. Vilified by his critics and admired by his supporters, he was called 'The Prophet of the Poor', 'God's Solder', and 'The General Next to God'. Colleges and schools, hostels, homes and hospitals, and even a mountain were named after him. He met kings and prominent statesmen, became a Freeman of London and Nottingham, and was awarded an honorary degree by Oxford University. In 2015, at the Army's 150th anniversary in London, his life and legacy were celebrated by 35,000 Salvationists from around the world.