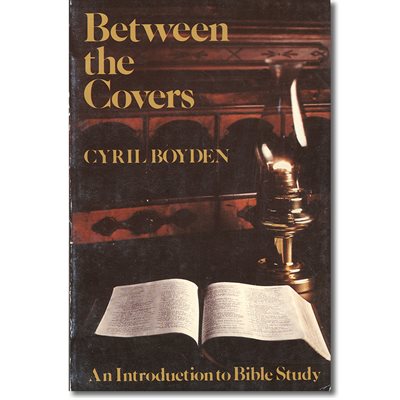 An Introduction to Bible Study

About the Author
Cyril Boyden has been associated with literary and education work throughout his career, contributing regularly to Salvation Army periodicals and, while serving at International Headquarters, writing numerous study handbooks. The original series of Corps Cadets Study Handbooks was his creation.

Following military service in World War II, he became a Salvation Army Officer in 1947, subsequently continuing his theological studies at the University of London. A member of the International Doctrine Council throughout the compilation of the present (1969 edition) Handbook, he was also for many years a visiting lecturer at the International College for Officers. Many officers who trained at the International Training College recall with gratitude his seven creative years as Head of the Education Department.

When he and Mrs. Boyden (accompanied by their daughter!) were transferred to the Canada and Bermuda Territory in 1971, their first appointments were in training and education. After divisional leadership in Newfoundland West and Labrador, and Ontario Central, they have recently been appointed as first Co-Directors of Pastoral Care in this territory a challenging assignment demanding creativity and informed caring.

For the Boydens, faith rests in a God who, in Jesus has proved Himself 'utterly dependable' (O Corinthians 1:9, J. B. Phillips).