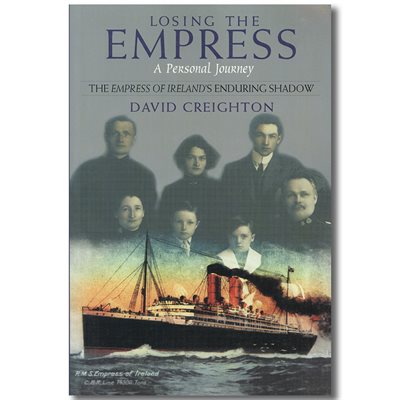 A Personal Journey
The Empress of Ireland's Enduring Shadow

The Empress of Ireland's last voyage ended on May 29, 1914, when she was rammed by a Norwegian coal-carrier in a fog patch on the St. Lawrence River near Rimouski. For David Creighton, her voyage continues.

In Losing the Empress, Creighton delves into the lives of his grandparents—Salvation Army officers who were lost on the Empress—and the lives of their five orphaned children who would soon be plunged into World War I. His discoveries reveal amazing details about the Empress, which sank in fourteen minutes, with a greater passenger loss than the Titanic disaster.

Shipwreck nostalgia, last voyage dinners, Salvationists, and the British Empire and the world wars fought to preserve it, everything comes into focus when the author joins Titanic discoverer Robert Ballard on a film shot at the sunken liner's site. Losing the Empress lyrically traces a personal journey into the past and into the future.