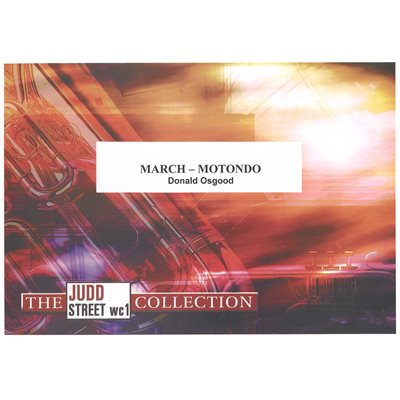 This march was written for the International Scouts' Motondo, held at Lunteren, Holland in 1952 and uses as one of its themes, Travel along in the sunshine, which was the favorite camp chorus. The word motondo refers to a gathering for giving thanks.

Introduction — The full-band quavers should not be too brittle, but full and well-placed. Clarity throughout is essential.

Section A — Give due emphasis to the figures for soprano, horns, baritones and euphonium in the second and fourth bars but avoid vulgarity in the swells. The duet figure for cornets in the bar before the repeat should be played with verve and strong rhythmic pulse.

Section B — This is full of harmonic and rhythmic interest, and every detail should be noted and given careful attention. A broad, expanding effect should be sought in bars 17 through 20. Note the important figure in the bar before C.

Section C — Here, the theme of section A is given entirely different treatment, the trombones, baritones and euphonium in particular being responsible for important rhythmic (sometimes syncopated) effects. Note that whereas bars 7 to 9 are built up over a crescendo, the same bars here (bars 33-35) recede to mezzo piano under a diminuendo, prior to a strong rise with the cornet duet figure. The final bars of the first part of the march are designed as a climax and should be given full weight within the bounds of good tone-control (a vital consideration).

Section D — Two bars, including an opening figure suggestive of the trio theme, introduce the chorus Travel along in the sunshine. Interpolations, calling for clean, precise tonguing, add to the interest. Note that after a steep rise to forte at bars 53-54, the theme continues at only piano in the penultimate bar it will be seen that the cornet sand trombones run counter to the horns; hence the latter must be particularly definite in attack in order to give point to the planned effect.

Section E — The earlier Travel along in the sunshine phrase supplies the basic idea for this episode. Statement and answer must at all times be positive and well-balanced. Two bars of strong unison lead into the final section.

Section F — Come stá, the directive at the commencement, means 'as it is' or 'play as written' and merely cancels out the general term marcato that governs the style of the previous section. Theme and countermelody are on usual lines, but observe the answering figures for horns in bars 75 and 76, and the drop to piano at bar 79. If a return to the beginning (da capo) is not desired, a strong alternative ending is provided — a very acceptable device, especially for festival use.