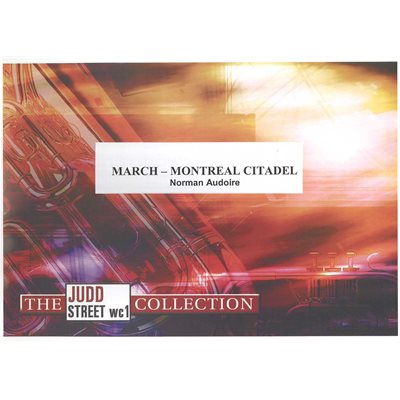 This march was first published in 1934, the composer being the bandmaster at Montreal Citadel at that time. The introduction is longer than usual, and there is plenty of florid work for a number of instruments, and in playing this the chief aim must be for clarity in both tongued and slurred groups. This will probably be more difficult in the latter, where there is no action of the tongue to mark the rhythm. Most of these passages are, however, given to instrumentalists who can generally be relied upon, and as the remaining parts are quite straightforward, the music should shape up after a moderate amount of rehearsal.

Section A continues in somewhat the same idiom, the main feature being the imitation work by 1st baritone and euphonium, while tenor trombones have a smooth countertheme. The rhythmic background for horns is quite interesting, and should help the lilt of the music considerably.

The chorus Calvary's stream is flowing has been adapted for march use at letter B. Originally written in 3/4, it stands the change to 2/4 very well. Play the theme smoothly and see that the countermelody for cornets does not take too prominent a position. This section offers little in the way of difficulty.

The latter remark may also apply to the bass solo at letter C. The theme is within a comfortable range, and the cornet and horn parts are on usual lines.

Syncopation is a prominent feature in the trio-introduction at D, while upper cornets have florid work which calls for very clear tonguing.

The main trio theme appears at letter E, and is given out by the horns. This is a perky tune which must be played very rhythmically. Against it there is a smooth countertheme for 1st baritone and euphonium which adds considerably interest to the music. Note also the sustained chords for the 1st and 2nd cornets, which, if well balanced, will add effective tone color. The theme is repeated with additions to the scoring at bar 119, notably a rhythmic pattern for upper cornets, which must be neatly inserted and held well in check, it being of secondary importance to the main tune, which might easily be lost in the mass of full band tone.

In the episode at letter F the upper cornet and 1st baritone parts again call for 'slickness' in tongue and finger action. Trombone, euphonium and bass parts are interesting, and plenty of weight and live tone is needed in the inner parts if the harmonic balance is to be properly effective. D your best to 'get over' the scalic figure for horns and 1st baritone four bars before G; this may not be too easily heard against the fortissimo chord of the rest of the band.

The trio theme receives its final presentation at G, the scoring being straightforward, yet maintaining interest. Bands will enjoy playing this spirited march, which, within the limits of a somewhat restricted harmonic scheme exploits instrumental and rhythmic ideas very effectively.