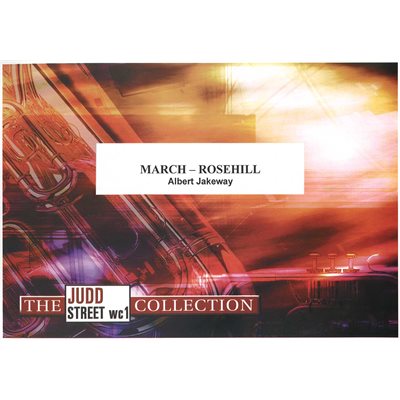 As the title suggests, this march was written as a tribute to the Rosehill Band of The Salvation Army's Assurance Society. The name is derived from the property taken over when the Society evacuated from London to Reading at the beginning of World War II. The band was formed as the result of a number of enthusiastic musician employees getting together to practice and play music in their spare time, and from this the band gradually developed until it became an established combination, well known up and down the country and also wider afield by reason of its frequent broadcasts through the medium of the BBC.

Introduction — This somewhat lengthly movement introduces the three-note motif which recurs frequently throughout the march — the G, Bb and F# first head in the opening bar and the first note of the second. Attack these notes boldly and avoid spreading the opening grace notes; these must be placed as close as possible to the principal note. The first three notes of bar 3 are a repetition of the motif in diminution. Drop right down to mezzo piano in bar 5 (the end of bar 4 for solo cornet) and make a nicely graded crescendo to forte in the space of the three bars. The notes of these bars will be met with several times during the composition. Solo horn and euphonium feature prominently in the bars following, and these parts should be in sympathy with each other. The players must closely observe all dynamic changes if the beast is to be got out of the music. The next four bars constitute a repetition of the opening statement, and this is followed by a short bass solo figure accompanied by sharply-tongued 'trumpeting' in semiquavers. Care will need to be exercised in the answering figures in the last two bars. Note the diminuendo in the last bar and treat accordingly.

Section A — Plenty of contrast, both dynamically and melodically, is provided in this first subject, as a close study of the score will reveal. The principal theme is yet another treatment of the three-note motif, and some of these figures are to be played solo. Where the full band enters, there should be no avalanche of noise; the force mark is only mezzo piano. Grade well the crescendo following this entry. The music in the last two bars of 'trumpeting' for cornets and trombones must be cleanly tongued, keeping well down to the given dynamic.

Section B This is quite different from the usual type of second subject in many ways and again much in the way of contrast is provided. Perhaps the main feature is the frequent use of the flat 6th in the melodic structure, particularly in the part allotted to solo horn and euphonium. Dynamic markings are also many and various.

Section C — Based upon the three-note motif and its subsequent melodic structure, this bass solo will be reveled in by those who have the melody, for it is quite easy to play. Very little difficulty should be experienced with the 'trumpeting'. A coda is given from bar 70, and once again the motif is used. The treatment here demands boldness, for accents are plentiful.

Section D — This is fairly straightforward music which serves to introduce the trio subject.

Section E — With a change to 4/4 meter, the chorus of a song by the well known songwriter, Will J. Brand, is given. It is a good melody, having shape and an attractive march tread throughout, and in the hands of 1st baritone and euphonium, should sound really well. The accompaniment is easy and will soon take shape.

Section F — Once again the motif is employed, treated in bass solo fashion to form part of the episode. The upper cornet and solo horn parts may be troublesome on account of the range, but a good lip and dexterity of fingers will soon right any difficulty. Drop right down to mezzo piano at the end of bar 103, and see that the trombone and euphonium responses are neatly inserted. Grade well the crescendo covering the last two bars.

Section G — This is a repetition of the trio subject with the full band employed, the melody now being in the hands of supper cornets and tenor trombones. All is on easy lines and this should be read at sight. The march is concluded by the usual D.C.