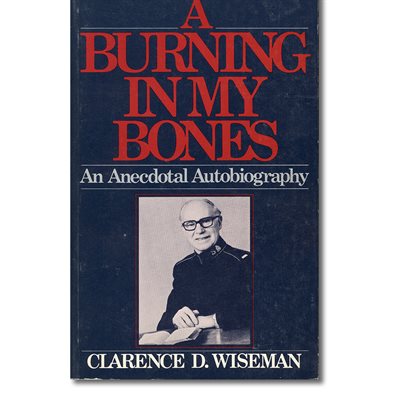 A Burning in My Bones

When William Booth founded The Salvation Army in 1865, he deliberately gave it the structure of an army and imbued it with a militancy that characterizes The Army to this day. More than most other religious bodies, The Salvation Army is outgoing. Its spirit is one of joy, energy and service — joy in the proclamation of the gospel, and energy and service in helping the sick, poor and downtrodden. These twin concerns for spreading the Gospel and social welfare have guided Clarence Wiseman throughout his life.

Clarence D. Wiseman was born in Moreton's Harbour, a Newfoundland outport. His parents were Salvation Army officers and the family moved to various postings in Ontario and Quebec. After a period of self-doubt during his teenage years, he committed himself wholeheartedly to The Army and was commissioned as an officer in 1927. In this autobiography he tells of his childhood and his early years as an officer during the Depression, when Army officers tried to aid the poor and the unemployed although they could barely make ends meet themselves. He tells of his war service with the Red Shield and subsequent career in The Army, culminating in his election as General of the International Salvation Army in 1974. He was the first Canadian to hold this position.

General Wiseman brought to his period of leadership a combination of evangelical zeal and concern for the work of The Army around the world, particularly among the many third-world countries that are facing dire problems of disease, famine and poverty.

Through this autobiography General Clarence D. Wiseman conveys not only the experiences of his career in The Army, but the meaning of Salvation Army service for him. It is a story told with skill, humor, compassion and humility.