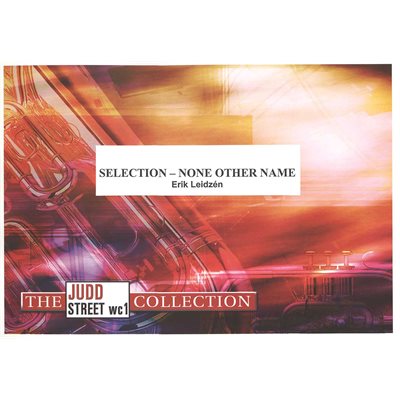 JSC None Other Name

This was originally composed for the Star Lake Music Camp (USA) and the subject matter is the same as that of the composer's former much loved work, The Saviour's name. The present title is derived from St Peter's words following the healing of the lame man at the 'Beautiful' gate of the Temple (Acts 4:12). The selection was first featured by the New York Staff Band during their 1960 tour of Great Britain. There are certain technical difficulties that will call for careful rehearsal, but it will be time well spent, and the final result will, we feel sure, bring blessing and satisfaction to both players and listeners.

Introduction — Following a quiet (but let it be a confident) bass entry the melody of the first song employed is heard in broken fashion: 'There is a name I love to hear'. Each entry must be clear and precise so that the shape of the melody is unmistakable. Further broken chords follow, the overall effect being to prepare for the fairly strong presentation of the melody by trombones at letter A.

Sections A and B — The arrangement of the song 'The Saviour's name' is full of interest and even drama at times. Note that the tempo increases a little for the verse but drops back again almost to tempo primo for the chorus. Perfect timing of the euphonium and bass entries in section B, with a very short, clean acciaccatura, is essential. Avoid any feeling of hurry in the demisemiquaver runs just prior to letter C.

Section C — Bring forward the syncopation in the first bar quite clearly, duly noting the diminuendo. The key signature and accidentals may prove an obstacle at first, but familiarity will soon engender confidence and facility. A reference to the chorus 'Jesus is the sweetest name I know' may be recognized here, in preparation for its appearance in full as a quartet in section D.

Section D — A perfect understanding between the four participants will bring out the beauty of this arrangement which features smoothly flowing quavers, the phrasing of which is clearly shown.

Section E — Overlapping the final phrase of the previous chorus comes a first reference to another chorus, 'There's a wonderful name, 'tis Jesus'. The phrase is repeated several times in the following bars, each time picked out by staccato quavers; bring these through clearly, with due emphasis.

Section F — The melody of the theme is considerably broken and much care will have to be exercised to make it 'hang together' satisfactorily, it should be noted, however, that for the first six bars the melody is heard in complete form in the 1st baritone part. At the end of bar six, trombones take over 'Blessèd Jesus', followed by soprano and solo horn, 'Wonderful name'. The amount of tempo rubato to be introduced is entirely in the hands of the conductor, and considerable rehearsal may be necessary before a truly satisfactory result is achieved.

Section G — A clear two-beats-to-the-bar must be established here in order to unify the simple and compound times indicated. The duple quavers, brought out strongly against the legato compound quavers, should be most effective. The music builds up very strongly in this section and some restraint will be necessary to avoid harshness in the fortissimo bars. A sudden drop to piano in the last bar precedes the introduction by the euphonium to the chorus 'He's the Lily of the valley'. Watch the timing for this entry.

Section H — Two points call for attention here; the 'echo' figure for flugel horn and baritone, and the semiquaver,s pointed in pairs, which appear in bar fur. This semiquaver figure is featured prominently later, and a clear pattern should be established where it first appears.

Section I and J — The broken structure of the upper parts is held together by a firm bass descending figure that leads to a combination of forte-piano chord-building and the now familiar semiquaver pattern.

Section K — 'Jesus, the very thought of thee' (St Agnes) is now introduced by 2nd trombone, euphonium and upper Eb bass, this latter being an unusual but most telling feature, Do not allow the melody to be overwhelmed at any time.

Section L — A hint of the more martial style that is to follow is heard in the trombones (muted), after which well-marked references to 'All hail the power' (Diadem) are introduced; establish a steady tempo and firm style as they are to remain constant for the following for sections.

Sections M to O — the song, 'All hail the power of Jesus' name' is arranged in a vigorous, stirring manner that involves detailed and important work for all sections in turn. One effect is frequently played off against another and it would be difficult for the conductor to direct every detail; it therefore becomes necessary for each player conscientiously and meticulously to add his contributions to the majestic effect planned by the composer.

Sections P to R — With a change of key comes an even more brilliant setting of Diadem. Clean tonguing by lower cornets and trombones is essential, as is also the predominance of the melody line. In spite of the fortissimo marking, hold something in reserve for the rather demanding finale. It is impossible to deal with all details in these brief notes; suffice it to say that similar figures and patterns should be throughly rehearsed separately, and these eventually put together to produce a unified, controlled and majestic sound, as befits the subject here: 'Crown him Lord of all!'.

Sections S and T — Following the molto rit. in the two bars before letter S, the music breaks into a brighter, allegro style, as though to emphasize the triumphant sentiments of the previous song. Considerable dexterity is demanded of all, especially in the septuplet groups in section T. The music finally comes to a magnificent conclusion in fanfare style under largo and rit directives, but let there be all tone and no 'blare' in the final fff chord.