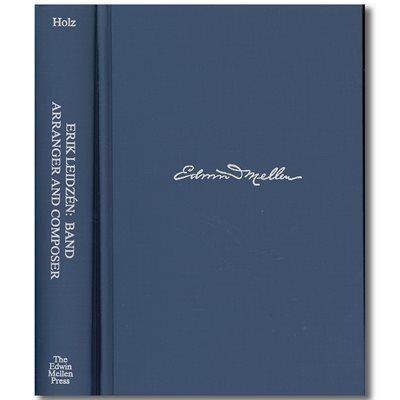 Volume 29 of Studies in the History and Interpretation of Music

Foreword
To only a few individuals is given the privilege of standing head and shoulders above their talented peers in their own lifetime. With some, history diminishes that reputation, while with others, history only reinforces and enhances it.

Erik Leidzén, as master of the brass and concert band score, in his lifetime shone as its brightest star in the American banding constellation, and equal to any on the international scene. Since his death in 1962, history has done nothing other than polish the brilliance of that star.

It was my privilege, along with Mrs. Ditmer, to visit the apartment of Erik and Maria on a number of occasions. After our first son was born he joined us several times. Cath and Maria would play with the new baby and enjoy conversation, while I was with Erik as he sat at the piano keyboard in the music room reading my music scores and offering (always with utmost kindness) his helpful and perceptive critique.

Erik was alternately serious and humorous; sympathetic and censorious; kindly and caustic; considerate and demanding. A man of highest standards for himself, others, and Jesus Christ, he was never able to settle for second best.

Dr. Ronald Holz has given a choice gift to us who knew, fraternized with, and played under Erik, by providing this written record of the man we knew and admired so much. We owe him a deep debt of gratitude.

For Dr. Holz, commencing his book back in 1987, it has been a labor of love because of his own boyhood relationship and the very close friendship of his father with Erik which, more than friendship, was deep mutual respect and affection. Dr. Holz's record is honest, never avoiding the unpleasant occurrences, but always insightful and respectful.

No written record could adequately describe this humble yet complex servant of the Lord. For those of us who knew Erik, this record will revive memories by which we once again will be tremendously enriched. For those who were too young, or yet unborn and thus denied the privilege of knowing him personally, this book will help you to know and understand what made Erik Erik, and thus make it possible to understand the spiritual power which underlies his music which we still play and sing, and which will be played and sung as long as there are bands and a Salvation Army.

The book will inspire each reader to reach for the highest standard of character, integrity and activity. In doing so, we each will want to join Erik by following "The Call," "Pressing Onward" with Him for whom there is "None Other Name." Erik has arrived, but he continues to inspire the rest of us who are still "On the Way Home."