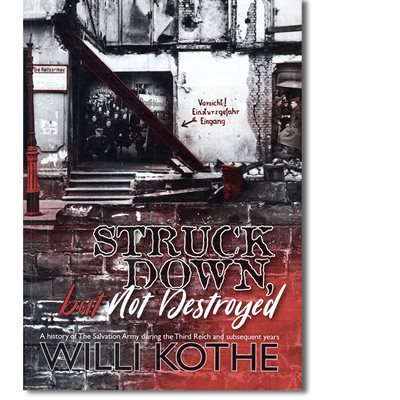 Struck Down But Not Destroyed

A History of The Salvation Army During the Third Reich and Subsequent Years.

When the National Socialist ideology took its grip of Germany in the 1920s and 30s, by no means everyone was seduced by its appeal. The ministry of The Salvation Army had to find ways of surviving and serving people in Jesus' name while being restricted and severely affected by the horrors of the ensuing war: Practically every public demonstration of Salvationism was forbidden and The War Cry was proscribed.

Paul's statements in 2 Corinthians 4:9 could be applied to this situation: 'persecuted, but not abandoned; struck down, but not destroyed'. Wherever possible, however, meetings were still being held and — despite oppression, including questioning of Salvationists leaders by the Gestapo — social work activities continued. After the total breakdown at the end of the war, new life sprang up from the ruins.

Through the perspective of many individual testimonies and events related to Salvationists service in Germany, this book addresses this phase of European history, describing what a difficult path The Salvation Army had to tread during the Third Reich and the immediate post-war years.