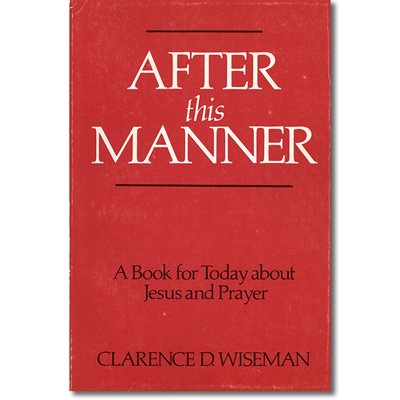 A Book for Today about Jesus and Prayer

General and Mrs. Wiseman are Canadians who, prior to their retirement in July, 1977, served for fifty years as active Officers of The Salvation Army. For the last three years of active service the General was the Army's tenth International Leader, with Headquarters in London, England — the first Canadian to hold this position.

During the early years of World War II, General Wiseman was a military chaplain with the Canadian Army overseas. In the final period of the war, he commanded Salvation Army Welfare Services with the Army, Navy and Air Force on all fighting fronts.

After World War II, the General held a number of responsible positions in his homeland, including that of Second-in-Command. He was promoted to the rank of Commissioner in 1960, and took command of The Salvation Army in East Africa, a term of service marked by great expansion in both church work and social services.

The General was next appointed as Principal of the International Training College for Officers in London, England. The following seven years were devoted to leadership of the Army in Canada and Bermuda, and in 1974 he was elected by the High Council of The Salvation Army as International Leader throughout the world.

The General holds one of the highest honours of his own country, that of Officer of the Order of Canada. His autobiography — "A Burning in My Bones" — has already had world-wide sale, and a second book — "The Desert Road to Glory" — has been published.

Mrs. General Wiseman is a Commissioned Office in her own right. Throughout her life she has given outstanding leadership in The Salvation Army's Women's International Organizations.