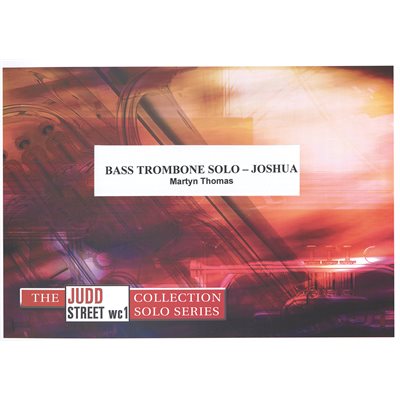 This Bass Trombone solo was written for Phil Rayment but has also been adopted by Stephen Williams and the International Staff Band.

The arrangement is intended as a 'cool' musical depiction of how Joshua led the Israelites across the River Jordan into the land that God had promised them. Jericho had high walls around it and the gate were shut tight because the people were afraid of the Israelites. But the Lord said to Joshua, I have given you the city of Jericho. You and your fighting men are to walk around the town once a day for six days. On the seventh day, you are to march around the town seven times with the priests blowing their ram's horns. When you hear the priests give on long blast on their horns, have all the the people shout as loud as they can. Then the walls of the town will collapse and you can take the town. (Joshua 6:2-5) Joshua did as the Lord told him and the Israelites captured the town of Jericho.

The opening should be played in bluesy ballad style continuing into the first six bars of section A. From bar 7 of A, the music takes up a laid-back swing feel. At the change of key, bar 47, the Basses should play their crochets light and short, but not staccato.

Section E can be repeated as many times as desired and audience participation in the off-beat clapping and shouting of 'Glory' should be encouraged.

The cadenza at section H lends itself to extend improvisation by the soloist although it will work perfectly well as written. After the cadenza this piece arrives at its natural conclusion; 'And the walls came tumbling down'.