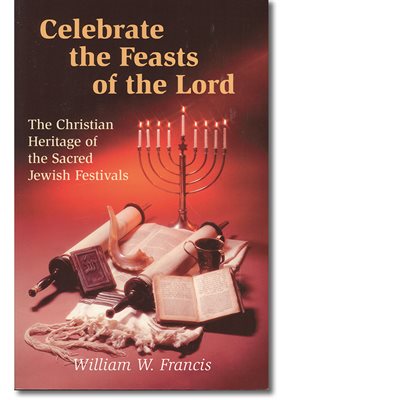 Celebrate the Feasts of the Lord

The Christian Heritage of the Sacred Jewish Festivals

Christians too often ignore their own history. We have failed to recognize that the Old Testament was the Scripture of our Lord and the earliest Christians, and that the land of Israel was not only the place of the birth of Jesus but the place of his life and ministry, his death and resurrection. The Hebraic culture was one in which our Lord was immersed, and the earliest Christians were Jewish. With his thorough knowledge of the Scriptures, the land of the Bible and Judaism, Lt. Colonel William Francis moves the reader through the intricate pathways of Old Testament passages with great skill. Because of his appreciation of Judaism, he brings our Hebraic heritage to light, and in doing so helps us to know ourselves.

He could certainly have chosen simpler Old Testament texts and themes to explain, but he chose, instead, the path of hard study and critical evaluation–primarily of Leviticus, a book which is not often the subject of the Sunday morning sermon. By his careful scholarship, historical analysis and sensitivity to the original meaning of the texts, he enlivens those passages for the Christian without in any way diminishing the historical, agricultural or sacrificial characteristics of the feasts. Lt. Colonel Francis applies the kind of interpretive skills to the text which model for all readers how the Word of God should be approached. His study of the messianic prophecies of the Old Testament are rooted in the New Testament texts which provide the full meaning of such prophecies, and thereby render this book an invaluable guide for how to interpret the feasts of the Lord specifically and how to interpret Scriptures generally.

One senses immediately the excitement of the author for this important subject, and so every reader of Celebrate the Feasts of the Lord will be moved along by the text in anticipation of the next word. This is especially true as the richer and deeper meaning of the feasts for Christians are available as "self-evident truths, without need to distort texts or misinterpret truths." All Christians will rejoice in this book because is, in the last analysis, a book about our Lord Jesus Christ and the full range of his redemptive life and ministry.

Study guides have been provided at the end of each chapter thereby assisting the reading in as comprehensive an understanding of this book as possible. This is further demonstration of the pastoral concern of Lt. Colonel Francis. His implied intention for this book is clear from beginning to end– to provide readers with a book which will be useful for study of the Scriptures, for sermon preparation and for personal devotions.

As one who has been privileged to read this book and to know the author, I am aware of the riches of the text which will unfold for every favored reader, and I share the anticipation of the author as this important book finds its way into the common life of the Church. May all who turn the pages of Celebrate the Feats of the Lord find yourselves indeed feasting on this text with thanksgiving for the dedicated work of Lt. Colonel Francis and with joy for the ultimate message of the book.