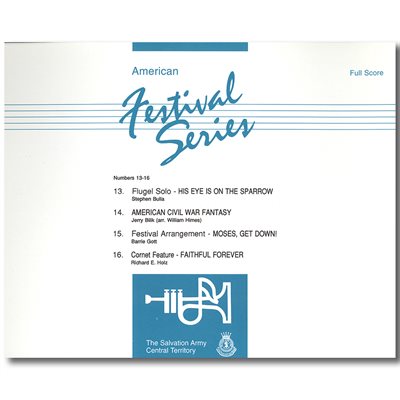 Note to the Conductor:
From an interpretive standpoint, the key concept to keep in mind throughout this work is rubato. Soloist and band are well advised to take the time to savor the richness of harmony and texture, so expertly constructed by Bandmaster Stephen Bulla (National Capital Band Washington, D.C.).

Attention must also be given to the accompaniment's balance and transparency in order for the flugel's rich timbre to project without effort. Rather than a detailed analysis, the following general concepts will hopefully be more helpful:

Exaggerate the tenuto and rallentando effects, stretching the time and crescendos to full effect (see bars 2 and 3)

An unusual effect in bar 7 directs cornets and trombones to play into the music ("in stand") to achieve a subdued, yet non-muted effect, allowing the horn motif to project with ease.

Tempo changes (bars 17, 41, 76) though sudden, should not involve a change of volume or style. Strive for a seamless approach, keeping in mind the fact that the new tempo are roughly equivalent to the eighth-note (quaver) pulse of the preceding tempo.

Mallet percussion parts (bells, vibraphone, chimes) are not essential, but certainly add to the sparkle of this creative score.

Program Note:
Now that the United States has marked the 125th anniversary of the Civil War, it is appropriate that this masterful slice of Americana should find its way into the brass band idiom. Originally conceived for concert band and later scored for orchestra, the composer has ingeniously woven together fragments of well-known melodies of the era, vividly depicting the anticipation of war, the devastation of battle, and the emergence of a healing nation, strong and united.

Note to the Conductor:
Gratitude is expressed to composer Jerry Bilik and the publisher and copyright holder, Southern Music Publishing, Inc., for allowing The Salvation Army to include this brass band version in the American Festival Series.

Because this work was originally conceived for concert (wind) band, the missing woodwind timbres have been approximated through the use of several types of mutes (cup, straight, harmon). Following these specific mute directives will greatly enhance the textural diversity and clarity of this adaptation for brass band.

Intro: The opening reference to the "Battle Hymn" should emulate the timbre and non-vibrato style of the French horn. Do not overlook the importance of the bass drum (a large beater is recommended) in adding to the heaviness of the crescendo reached at bar 9.

Bars 33-87: Let the operative word be leggiero throughout this section, especially where articulated 16ths (semi-quavers) are concerned.

Bars 88-162: The percussion section does much to create the growing mood of militarism, a harbinger of hte war to come. A marching style should be sought here.

Bars 163-181: As the song, "Just before the battle, Mother," implies, this section represents the calm before the storm. The euphonium is given the solo role here, with hints of other nostalgic themes coming and going - but not detracting from - this expressive melody.

The horn trills (along with the euphonium sneaking in to add to the crescendo) in bars 178-180 provide a simple yet effective transition to the outset of battle.

Bars 182-252: As this battle unfolds, care must be given to pace the intensity texture and dynamics. Keep in mind that what begins as noble and spirited, concludes in a dissonant collision. The percussion effects in bars 246-252 should be dramatic (with optional cannon!), powerful, and unhurried, especially the gradual diminuendo which provides the transition into the final section.

Bars 253-end: A complete presentation of the "Battle Hymn of the Republic" now unfolds as a chorale, with profound simplicity. It is intended to be a hymn of healing, depicting a nation rising from the ashes of a fratricidal conflict. Adhere to the pianissimo indication at bar 253, utilizing an organ-like sonority. Keep the bar 261 crescendo in check until its true peak in bar 264. Bring out the suspension here, found in the 1st horn, 1st baritone and 2nd trombone parts.

Let the crescendo build gradually into bar 271 with a sense of arrival and resolution, striving for a stirring and noble conclusion.

Program Note:
Rock and swing styles are exploited to good effect in this attractive setting of the well known spiritual, "Go down, Moses."

Note to the Conductor:
This crowd-pleaser is quite playable, but when rehearsing/performing, keep the following specifics in mind:

Drum kit will be absolutely essential to the performance of this festival arrangement; no only for establishing the idiom, but also for keeping a steady tempo.

The basic motif (bars 3-6) can be easily learned if players first sing this passage, concentrating on the articulation style when doing so. Remember tha a rock style is literal, whereas swing calls for a conceptual adjustment, whereby even eighths (quavers) played in a 6/8 quarter-and-eighth (crotchet-and-quaver) manner.

Cornets and trombones are required to play "fall-offs" in bars 25, 43 and 76 (baritones and horns included here). For uniform execution of this effect, players should play the note to its full length and "fall-off" into the rest.

At bar 45, the music shifts immediately from rock to swing. Remember the tempo must remain constant! The same is true for the switch back to rock at bar 61.

The final two bars pose a bit of a challenge as the rising "pyramid of sound" occurs in triplet quarter (crotchet) entries from low to high brass. To execute this successfully, the conductor is advised to conduct every entry, beating a 6-pattern for bar 92 and reverting to a 4-pattern for bar 93 (the final bar).

Program Note:
The late Commissioner Richard E. Holz composed this delightful feature especially for The Salvation Army Student Fellowship Band on the campus of Asbury College, Wilmore, Kentucky at the request of the composer's son, Dr. Ronald Holz, who is the bandmaster. The title refers to the feature gospel song, "Great is Thy Faithfulness".

Note to the Conductor:
Grateful acknowledgement is expressed to Hope Publishing Company, publisher of "Great is Thy Faithfulness", and Mrs. Commissioner Richard Holz, wife of the late musical giant, for granting permission for this feature to be published in this form in the American Festival Series.

This attractive feature is a "kindred spirit" to "Heralds of Victory," an earlier work of the same composer which was made famous by the New York Staff Band when Commissioner Holz was its bandmaster.

Although all four Cornet parts are essential, this can be performed as a section feature or with just a quartet. With its fanfare beginning, this is well-suited as a festival opener.

The Eb soprano part is the same as part I. Conductors (and librarians) should be aware that two different parts (I and II) are included in the band solo cornet parts. With the exception of this piece, all other music in this issue is identical, so check parts carefully when assigning music.

If used as a section feature, the conductor may wish to re-assign parts so that there is equal strength in each of the four parts. Therefore be advised of the following print format:
Strive for a moderate pace, rhythmic integrity and a light, supportive accompaniment.