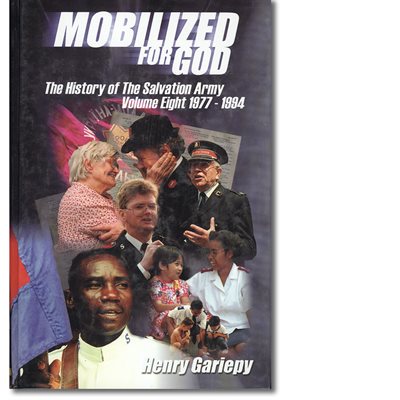 Foreword
Writing History readily remembered by those who lived through it has its risks. But given the pace at which the engrossing saga of Salvationism has been unfolding across the world in recent years, it is a story longing to be told. And Colonel Henry Gariepy has crafted this colorful chronicle of multifaceted mission with journalistic fascination and élan.

As our world whirls toward the uncertainties of the new millennium, besieged by anxieties over global political, ecological and epidemic medical crises, not to mention the moral and ethical dilemmas that seem to defy solution, and the plight of billions who struggle to survive in the grip of enervating poverty, this stirring story of bold, innovative and Christianly response will sound a note of hope and optimism for the future.

Inevitable these pages recorded celebratory events marking centenary milestones in many parts of the world. The Army has been in business for well over a century. This, after all, is volume eight of the official history. Those who track its progress through these pages will be struck, however, not first with its stability and consistency in addressing the perennial addiction and abuse, but its capacity of innovation and reinvention as it has encountered new historical realities: the fall of Communism in Eastern and Central Europe, the explosion of the HIV/AIDS pandemic, devastating natural disasters, the eruptions of complex humanitarian emergencies, as in Rwanda, and the proliferation of regional conflicts as in Liberia.

This period of Army history is also marked b major paradigm shifts in mission policy and strategic priorities, as well as an ability to learn from honest mistakes in judgment and a willingness to move on to fresh challenges when cherished programs are no longer relevant or viable. This is the story of an action Army willing to take risks—an Army in motion as it pursues with unwavering purpose and unflagging zeal its essential and unchanging mission.

Coursing through this portion of the salvation story is jubilant testimony to the faithfulness of God and appreciation of the remarkable dedication of his people. So it is with gratitude that we commend to readers within and beyond The Salvation Army this absorbing record of devotion to Christ and his cause, with the prayer that in traversing the track of missional enterprise it traces, faith will be renewed, hope engendered, and our hearts moved to gratitude and renewed commitment.