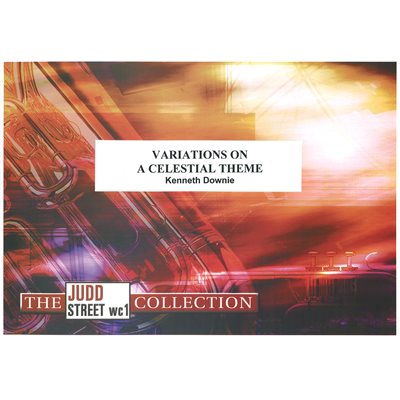 JSC - Variations On A Celestial Theme

The tune on which these variations are based is called Bright Crowns (T.B. 78). The author of both words and music is unknown, but it is thought that the tune may have originated from the Primitive Methodists. It certainly is a bright, energetic tune, which I find attractive, and I regret that it is now so rarely used.

The theme is played at the outset, at a tempo quicker than normally used for singing, and in a slightly spiky, moderately dissonant style. The first variation, at letter C, develops the energetic character of the theme with quick, running quavers which are eventually offset by semibreves on Trombones, associated with the word from the chorus, Bright Crowns. These two ideas wrestle with each other for the remainder of the variation.

The second variation, starting at letter J, is in a contrasting, slightly capricious mood with many short solos and frequent references to the start of the chorus. There is plenty of scope for bands to demonstrate that they can play with a light touch and with artistry; music attributes perhaps not always associated with brass bands.

The next variation, which starts at letter N, is fast and furious and draws its material mostly from the second part of the verse. There must be a relentless drive and energy throughout, culminating in the brilliant major triad on the final chord.

In complete contrast, the fourth variation, beginning at letter T, introduces a wistful element exploiting the last to phrases of the chorus, over an insistent pedal on bass and timpani. A reminder that My home is in Heaven (T.B. 740) comes at letter U before the final lingering over the words, 'For you and me there's a palm of victory'.

The fifth and final variation commences, at letter V, at a high tempo building up to references to When we all get to Heaven starting at letter W.
The chorus of Bright Crowns is once again acknowledged and the music draws to a majestic conclusion. (view series guide)
Produced by The Salvation Army, SP&S, UK

These variations are based on the tune, 'Bright Crowns'. The words of the chorus say: