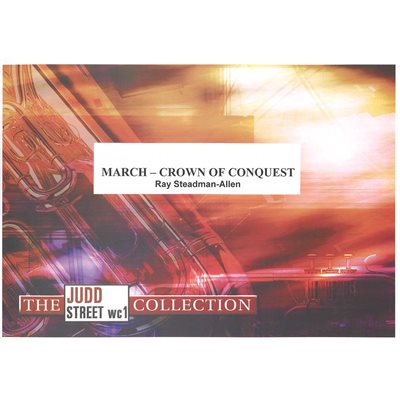 This march was written and first published in 1954 as a tribute to the memory of the late Bandmaster Arthur Gullidge and his company of Australian Salvationist musicians who perished so tragically as prisoners during World War II. The writer has deliberately reproduced the general characteristic idiom of the bandmaster's own distinctive march style.

Introduction — Commencing in the key of C minor, this strong, forceful introductory music requires precision and crisp tonguing. Pay attention to the articulation two bars before A; the contrast of slur and staccato coupled with a crescendo will be more effective if carefully interpreted.

Section A — The mezzo piano must be observed as there are two crescendi, one short and two long, to be negotiated during the course of the section which arrive at forte two bars before the repeat. The result of being louder than the indicated dynamic will be either to be too loud at the forte or to have to ignore the crescendi, both of which are bad faults. There is practically continuous imitation between the melody instruments and the 1st baritone and euphonium. Intelligent understanding of their function should mean good co-operation between these parts.

Section B — The tonic major key is now entered without fuss. Associated with this tune are the words, 'And sing I must, for Christ I have'. Note the four-quaver rhythmical similarity, in bars 19-20, between various groups of instruments. The first bar of the 1st-time bracket is of special importance as also is its counterpart, the first bar of the 2nd-time bracket which switches the music into the key of Eb by means of the diminished 7th chord common to both (but in a different inversion) on the fourth beat. Both of these bars, therefore, commence similarly (a third higher on the upper cornets and 1st trombone) but proceed along entirely different paths.

Section C — This is a modified reprise of section A; the first two bars are scored as a bass solo, the music then settling into more familiar lines from the fourth bar. With a reference to the introduction and some strong chord work this part of the march concludes.

Section D — The trio commences without preamble.. Baritones are euphonium have a smoothly-flowing theme which should give no trouble in performance. Where the tune splits into two parts additional help is forthcoming from other instruments. The touches of cornet and trombone color should not obtrude unduly.

Section E This is in C minor practically throughout. It will be seen that the episode begins with a few bars of a minor form of the tune given at B — I've found the pearl; to a large extent the scoring and arrangement are the same. From bar 62 the music takes a different turn and makes some reference to the introductory music; this is full-blooded material and well suited to the brass band, but it must not be allowed to degenerate from controlled power to undisciplined blare.

Section F — The melody is obviously smooth-flowing but it must not be sluggish nor lacking in buoyancy. Everything is designed to keep the music moving forward easily and apart from attention to one or two points (mainly rhythmical) this march will be found to be without technical problems.