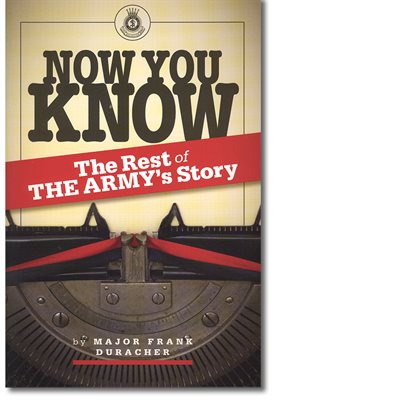 Now You Know: The Rest Of The Army's Story

Major Frank Duracher has long been an ardent admirer of the late Paul Harvey, who was a syndicated journalist and commentator for many decades. In particular, he always enjoyed listening to episodes of Harvey's radio program, The Rest of the Story. In each episode, Harvey would tell a little-known tale and reveal an ironic and surprising fact at the very end of the broadcast.

In that tradition, Major Duracher has crafted Now You Know: The Rest of The Army's Story. For almost five decades, has has been collecting nearly forgotten anecdotes from The Salvation Army's exciting and inspiring history. Now, he skillfully retells 50 of those most ironic and intriguing episodes, so that you will learn even more about the Army you swore you knew everything about.

As you read, you will uncover surprising incidents in the Army's history. You will mine nuggets of Scripture that define who the Army is as a movement. You will have a chance to revisit its most poignant moments, so that you may revel in exploring the evolution of this miracle we call The Salvation Army.