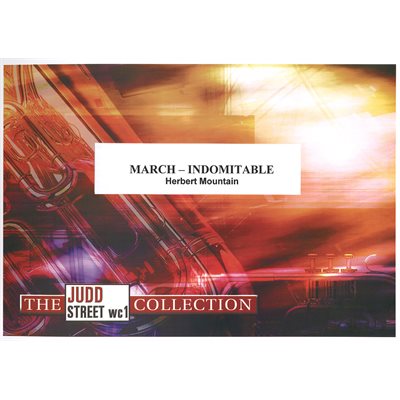 Introduction — The march opens in vigorous style in the key of G minor, with a weighty, crashing, held chord for all except the upper cornets who commence active operations immediately, the 'lower end' following their example in the second bar. But the preliminaries are quickly over and we are soon launched on the march proper.

Section A — Still in the minor key, this features 'solo' statements by solo cornet, greeted at their close with full band punctuations as though in endorsement of what has been said. Pay regard to the varying dynamics, and keep the accompaniment down. Following the second shout of agreement, the full band joins in the spirited discussion which is then carried on. Well mark the rhythm here.

Section B — With a switch to the major key, the refrain of Onward, Christian soldiers now appears in the band's middle register, decorated by a lilting tune provided by upper cornets which should throw the chief melody into strong contrast. At the phrase 'With the cross of Jesus', the melody is taken by soprano and horns, with the music one degree stronger; the theme then goes up to the upper cornets for the closing phrase which is repeated as a codetta.

Section C — The bass solo,l which is quite devoid of difficulty and will almost play itself, brings to a close the main part of the march.

Introduction and Section D — With the usual change to the key of the subdominant, there is a brief preparation for the trio theme, the melody of which is taken by the soft-toned baritones and euphonium. This is quiet and restrained in character, of easy range, with a light accompaniment.

Section E — Notice that this interlude, though scored for full band, is marked mezzo forte, so do not pull out all the stops, although there is a little opening up toward the end where the music becomes more vigorous. Following this, there is a return to the quiet trio theme.

Section F — Before his da capo, the composer adds a more forceful subject where all instruments are busily employed and give vent to their jubilant spirits; but do not overlook the temporary drop to mezzo forte halfway along. (view series guide)
Produced by The Salvation Army, SP&S, UK