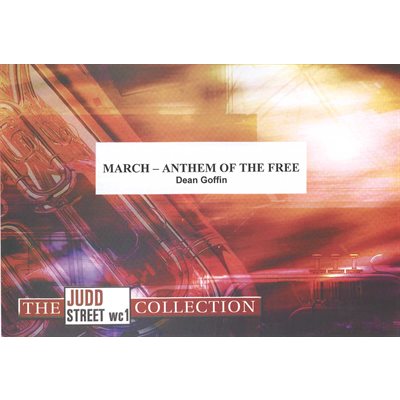 JSC Anthem Of The Free

Introduction — The dual nature of the structure here will be immediately apparent: fanfare-like figures for the upper instruments, and a stately tread for the lower. Clean, unified semiquavers from the 'trumpeters' are essential. The quaver run for basses that links the two sequential phrases must not become a scramble; pointing the first note of each group of three will help avoid this.

Section A — A lilting melody by the cornets is doubled in legato style by baritones and euphonium. Note the sudden drop to piano following a strong attack upon the first note of the section; similarly in the ninth bar where the forte is the peak of a three-bar crescendo, and again in the first time bracket. The music breathes an air of freedom in keeping with the title; therefore avoid heavy, ponderous treatment.

Section B — This is a particularly interesting section, effective use being made of canonic treatment, each entry of which must be given due emphasis, but with due regard to balance, Tonality has switched to Ab although the key signature has not been changed; this could be pointed out to the players to ensure they are 'thinking in the right key'. The drop to piano in the alternate phrases should be interpreted literally; it is almost impossible to overdo this effect. And remember, dynamics are for observation on the march as well as in musical festivals. A quaver run for basses, similar to that in the introduction, leads the ear to the chord of Bb minor 7th, upon which the music pivots to the original key of Eb.

Section C — This is a reprise of section A, except for a little extra exuberance on the part of the soprano, baritones and euphonium, whose sense of freedom is evidently irrepressible! The final cadence is delayed for two bars over a crescendo, after which the figure used in the first time bracket of section A is adapted to provide a very convincing finish to the first part of the march.

Section D — A brief statement similar to the introduction heralds the subdominate key of Ab. An old favorite, well suited to the treatment, appears as the trio theme. Avoid the all-too-prevalent tendency to cut short the crotchets in a 6/8 march; such a style, in this instance particularly, would make the music sound trifling instead of buoyant. Blend the cornet and horn tone in the melody with, if anything, more horn tone than cornet.

Section E — Four distinct patterns will be observed here: that of the melody, followed by all cornets and upper horns; a rhythmic pattern by 2nd horn, 2nd baritone and tenor trombones; a legato-style countermelody by 1st horn, 1st baritone and euphonium; and the usual tread by the basses. Volume increases by a degree upon the repeat. Having in mind, no doubt, the many occasions when no return to the beginning is made, the composer has rounded off the trio section to a strong finish.