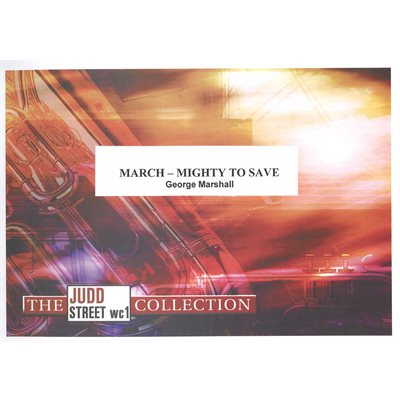 JSC Mighty To Save!

To such as have predilection for marches of a brilliant and stimulating character this composition will make an immediate appeal.

A brief introduction, opening in unison, leads us directly into the first movement. The clearly-marked rhythmic pattern adopted here will at once attract attention as will also the points of imitation in the early phrases where some of the melodic figures are repeated at a bar's distance by a number of the middle instruments. As the full band is employed throughout this section care must be taken to avoid a heavy or forceful style of playing.

A strong contrast, however, is provided in the next section where for eight bars the arrangement is in the style of a bass solo. Here well sustained weight and solidity are required. The sudden drop to piano in the ninth bar will prove arresting if well done, as will also the further change to forte later on. The short figure given to the lower part of the band should be played in a compact manner as through the combined volume of sound were being produced on one instrument.

We are next introduced to the chorus of the song, 'Jesus is mighty to save! From the uttermost, to the uttermost, Mighty to save!' Several interesting features in the arrangement will attract attention, among them being two important countermelodies, one allotted to soprano and solo horn another to the baritones and euphonium. The scoring is still on the full side, and as this section is marked mezzo piano up to the final phrase, restraint in the matter of volume may need attention.

At letter D the foregoing theme is repeated, arranged now as a bass solo, and what a fine bass solo it is! How that grand truth — Jesus is mighty to save — will be thundered forth by thousands of Salvation Army bandsmen who will send out the message with the utmost fervor and assurance because they have proved the truth of the assertion! So long as the tone is good, the volume can hardly be too robust and strong, particularly in the final phrase. The upper instruments have a straightforward and pleasurable task.

The trio section is introduced by a couple of bars in which the new key is established. Many bandmasters will readily recognize the composer's style in this part of the march, and one or two of his earlier trios will quickly be called to mind, notably Stand to arms. Although the themes are note alike melodically, apart from the commencement, the style and general effect is somewhat similar. The playing should be well down to the force marks, and, as nearly all instruments are engaged, this point may requires special attention. The many slurs indicate that a smooth style of rendering is called for.

At letter F is an episode of a stirring nature, and while this may not prove really difficult to execute, care will be needed in regard to dynamics. In comparison to episodes of this kind in general this is somewhat more restrained in the matter of force, forte being the outside limit. The last phrase will probably prove the most troublesome, as there may be a strong tendency to 'let go' here.

At letter G the main theme is repeated, but here a much fuller effect is required. A good, robust forte is to be firmly maintained right to the end.