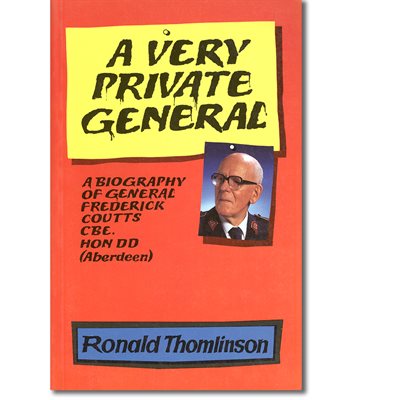 A Biography of General Frederick Coutts

Frederick Coutts was the sort of man who generated stories, and the anecdotes about him are legion. He was so unique that when these stories were recounted, the teller usually adopted a 'Coutts' posture, sentence construction and mannerisms. But even to those who would claim to have known him best, he remained a mystery. He was constantly working and, even whilst in the company of others, spent many hours alone with his thoughts; he did not easily allow people into his personal world. This book is therefore an attempt to show just what the kind of man Frederick Coutts was, and what the circumstances were in his life which, apart from his natural character and talents, may have molded him into the sort of person he became. His ability to communicate to the masses was, it seems, in inverse proportion to his ability to communicate in the smaller informal setting.

Many with whom he had worked or who had been influenced by him were reluctant to acknowledge his weaknesses, but he does not need that kind of protection: he was too great a man for that. Besides, it would be an insult to his memory to make of this biography a hagiography: he had read and written too much himself and was too wise and honest a man to receive that kind of treatment. This book must contain the same integrity as he possessed in life.

Note. The rank given to officers in this story is the one held by them at the time of reference.