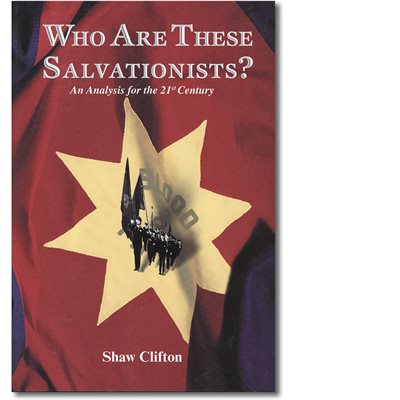 Who Are These Salvationists?

An Analysis for the 21stCentury

Drawing on scholarly research and Salvation Army service on give continents, Shaw Clifton has written a seminal study that explores the Army's roots, theology and position in the Body of believers. Who Are These Salvationists? provides a definitive profile of The Salvation Army as an "authentic expression of classical Christianity."

Clifton explores the theological grounding of Salvationists as Protestant Evangelicals, attestant to the verity of the Scriptures and the "essential nature of the personal and experiential dimensions of the Christian faith."

He then turns to the controversial issue of Salvationists sacramentalism. He considers the Army's history and current practices to explain that Salvationist sacramentalism does not hinge upon and outward form or ceremony: "When our hearts are made holy, all of life is a sacrament."

Finally, the author probes the Army's expansion into 124 countries since its inception in 1865. Clifton examines the workings of an international church, addressing such threats to a united, international Army as nationalism, cultural differences and—the ultimate threat—war.

Salvationists and non-Salvationists alike will find in Who Are These Salvationists? a penetrating and illuminating look back at the growth of this branch of Christianity and an optimistic view of the Army's prospects for the twenty-first century.