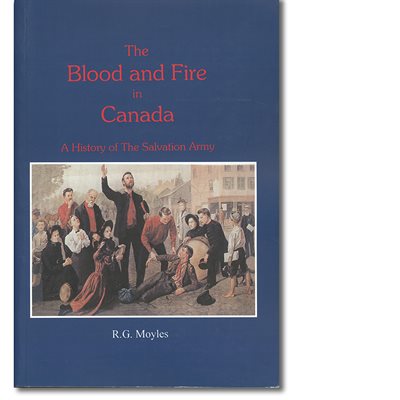 The Blood and Fire in Canada

A History of The Salvation Army

The Salvation Army: it's part of our Canadian heritage—Christmas kettles in shopping malls, the music of brass bands, the Red Shield appeals, and the help it gives to the lost and despairing.  But few Canadians are aware of the dramatic and exciting history of the Army in Canada.  The Blood and Fire in Canada is a fast paced and fascinating account of that history, evangelical and social, from the moment of invasion in 1882 down to the present day.

The Army's early days in Canada were exciting ones.  Salvationists invaded communities in loud and shocking force.  Sometimes they were beaten, and sometimes imprisoned.  Always seeking public attention, they attracted not only converts but also a good measure of hostility from the established churches.

Through the years, the Army matured.  The drum-thumping and cartwheels gave way to church-like worship, the revivalistic agency became a highly organized institution with an effective social-service outreach.  But, just as it had survived scandal, schism and tragedy, so it survived maturity, and remains with us today, a familiar presence on the Canadian scene.