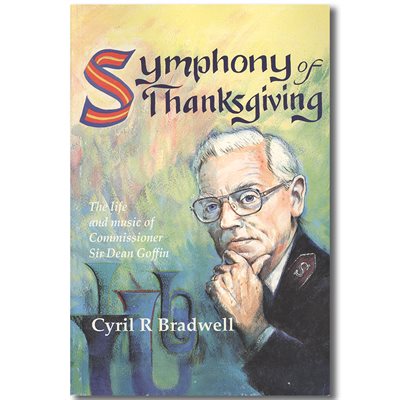 The life and music of Commissioner Sir Dean Goffin

SYMPHONY OF THANKSGIVING is a the fascinating story of a man whose life's purpose was forged in the violent crucible of war, and was worked out, intensely and gloriously, through music and service in The Salvation Army.

Dean Goffin was a man much loved and respected throughout the overlapping worlds of brass bands and The Salvation Army.  A highly gifted composer, he created music that speaks of the deep but simple truths that formed the foundation of his life, and that were the constant themes of his preaching.

His ten years in the United Kingdom, years marked by personal tragedy as well as triumph, were crucial for restoring strength and quality to Salvation Army music in that country, and his musical and personal influence around the world have been profound.

You will be moved and inspired as you read of this Wellington lad who became a world-renowned brass band composer and conductor, and eventually as Commissioner Sir Dean, MusB, leader of The Salvation Army in his homeland