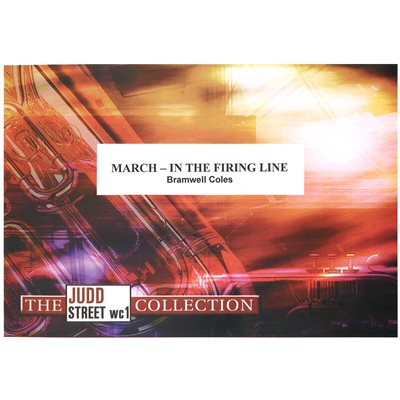 JSC In The Firing Line

While considerable demands are made in regard to execution in the introduction and the first subject, we do not think this fact need deter bands from taking up this march, for in actual work the music will not prove to be quite so exacting as it may appear at first sight, as the more rapid work lies well under the fingers. No great demands are made so far as tonguing is concerned. A clean effect will, therefore, depend largely upon exact finger movement, and it is to this mechanical feature that the bandmaster's early efforts in dealing with this item should be directed.

We are convinced that much of the slovenly playing one hears is the result of indecisive action of the fingers rather than want of ability to operate the tongue with the necessary fluency and rapidity. In some cases the defect is caused by lack of agreement between tongue and finger movements. they do not synchronize, hence the effect in rapid semiquaver passages is blurred and indistinct. We draw special attention to this point here, as it is essential to an effective rendering of the music before us that there be perfect co-ordination.

Both the introduction and the first subject are in the minor key. A big, solid tone is desired in the opening. The sustained parts should be played in a broad style so as to give a combined effect with the bustling work assigned to cornets, solo horn, 1st baritone and euphonium. Note the martellato accent given to the after-beats terminating the phrases in bars 2 and 4. See that the preceding note is not accented.

Apart from the semiquaver figures, section A will run on very easily. Avoid a heavy or labored style of playing here. The early phrases should come out very lightly, and with well-marked rhythm, building up a little stronger body of tone at the close.

If the various rhythms are properly developed in section B, and the music played with the requisite lightness and ease, this movement will stand out in good contrast with the preceding. The music should flow on with grace and rhythmic buoyancy.

The theme chosen for the bass solo is a fine, strong melody, and should come out splendidly in this form. Give due breadth to the triplets with which the first three phrases open. Frequently figures this kind are wanting in breadth and vigor. This remark also equally applies to the reiterated triplets in the upper parts. See that these are duly 'spread' in a clear, rhythmic manner. Note the bars bracketed for conclusion.

The trio is started straight away without introduction. The theme is allocated to 1st baritone, tenor trombones and euphonium, the upper cornets being tacet. A well-balanced, combined effect should be sought for, giving the melody a little prominence. Throughout the first presentment of this them the playing must be of a subdued nature.

The episode at letter E presents a very strong contrast after the comparative calm of the preceding. To use a metaphor suggested by the title, the firing again breaks out with renewed intensity. It will not be difficult to give a realistic description of a battle scene at this point if the accents both on and after the beats are properly given. A short, imaginative verbal description in cases of this kind sometimes proves helpful in the practice room.

At letter F we have a repetition of the principal theme of the trio now arranged for full band. The absence of a countermelody will be noted, as will also the prominence given to the melody, as, in addition to it being given to the upper cornets, we have it augmented by tenor trombones and euphonium. This theme should come out in a broad, dignified style.