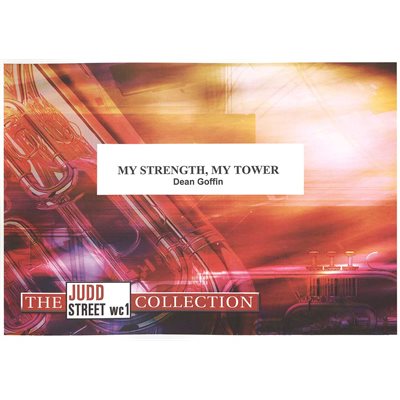 JSC My Strength, My Tower

Introduction — Just two chords, designed to arrest the attention at once.

Sections A and B — The theme was published in The Musical Salvationist for March-April 1953. The title derives from the words associated with the melody when published: Thee will I love, my strength, my tower, a hymn by Johann Scheffler translated by John Wesley. A strong modal flavor is characteristic of the theme. Where the Bass Eb departs from the bass part (between bars eight and fourteen), keep the Bass Bb a little stronger.

Sections C to F — This is a light and graceful movement with a good deal of imitative writing. Each line should be confidence and clear. the movement leads straight in to the succeeding one.

Sections G to J — Fire and ferocity are asked for in the course of this variation. Let there be no timidity, but a positive and brilliant attack all through the band. Establish the three-in-a-bar pulse right from the start with a drive and verve that will communicate the requisite mood.
Contrast is made in section I but it is short lived. Note the important Percussion contribution (which holds well throughout the work).

Sections K to M — This movement demonstrates the original approach of the composer. Apart from the obvious importance of the solo line with its arabesques and arpeggii, points to be considered are: In view of the general mood of the music, the fp indications should not be attacked savagely. Indeed, on the original manuscript, there is a penciled note by the composer asking that these effects be 'rather gentle'.
Three 3/2 bars are encountered during the course of the movement. The crotchet beat is maintained throughout; occasionally one comes across cases of misreading, with the result that the even pace is disturbed. Therefore, keep beating crotchets.
The first four bars of section L contain a different background: muted Cornets and Trombones. In rehearsal it will be as well to unify this independently of the Euphonium
Toward the end of this section and into section M, the open harmony figure previously mentioned is introduced more frequently and in varying tone colors. As these figures are an important part of the scheme (their thematic derivation is evident) ensure that they have sufficient prominence.

Sections N to P — The fourth variation is Passacaglia. The passcaglia was a dance form (in triple measure) originating in southern Europe. It was widely used by seventeenth and eighteenth century composers in the form of developed passages (amounting almost to variations) built on a ground bass. For the sake of completeness a ground bass may be briefly defined as a phrase, usually maintained in the bass and recurring throughout the piece. Such a phrase may be elaborated and may appear elsewhere than in the bass. Although normally a triple measure is understood by this form, nevertheless there is historical precedent for its use in other measures. In this variation, the quadruple measure is adopted, and the 'ground' is given out at once by the Basses. A superstructure of varying pattern and intensity then begins, with the 'ground' maintaining its stead progression through. Close attention to the construction will reveal the ingenuity with which fragments of the 'ground', plain or decorated, are combined and used in a number of ways, revealing the composer's mastery of contrapuntal technique.
At section P, for instance, the 'ground' is inverted, imitated in a stretto-like manner, and set against the Trombone, proceeding in the orthodox direction (in thirds). Before this combination is complete the Euphonium and Baritones begin a repeat of the Cornet inversion; halfway through this, Flugel and 1st Cornet take up the same strain. So the music proceeds and is built up. Note in the ninth bar of this section how the Basses play the 'ground' in double time while the Trombones sound the inverted form against it in the normal note values. Such analysis is strongly urged upon those who would teach this piece to their band; whilst it is agreed that a good performance can be obtained by reading the notes and general directions accurately, nevertheless an intelligent reading is only attained by a grasp of the principles which lie beneath them.
The composer observes that 'it may be impossible to play section O at the given speed, but the music in this passage must not drag'.

Section Q to the end — All players must have their wits about them in this briskly moving and scintillating final movement. Sudden variations of dynamic abound. The tempo is constant until the Coda is reached. Make the concluding bars full and convincing.