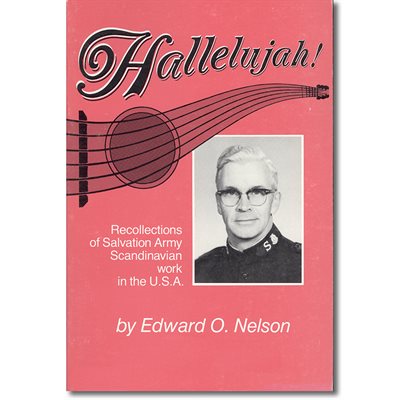 Recollections of Salvation Army Scandinavian work in the U.S.A.

In this centennial year of the inauguration of Scandinavian work in the United States, the Central Territory is pleased to make available these personal reminiscences of Lt. Colonel Edward O. Nelson. Although they were completed nearly nine years ago, just shortly before the Colonel's promotion to Glory, the years have not dimmed the spontaneity and freshness of his writing style. It is as if he is sitting at the table with you, leaning slightly forward, head cocked a bit to one side, a twinkle in his eye, as he tells yet another of the many stories contained herein.

Everything remains "in place" as it was in 1978. No attempt has been made to update his numerous references to corps and individuals as they were at the time; it was felt that this would have added considerably length and complexity to the book, while destroying to some extent its "flavor."

Suffice it to say that the strong family structure of our larger Scandinavian corps has, in most cases, continued to characterize them, regardless of what flag flies overhead. In the twenty-two years since the Scandinavian Department was merged with the "American" work, we have seen those corps flourish, while often continuing to bear the strong stamp of their origins. Today they continue to maintain their vitality as a part of the mainstream of Salvationist evangelism in this country.

We who never spoke a word of Swedish, Norwegian, Danish or Finnish owe a great debt to our Salvationist predecessors who sacrificed so much and who built so soundly. May this book be a tribute to their memory!