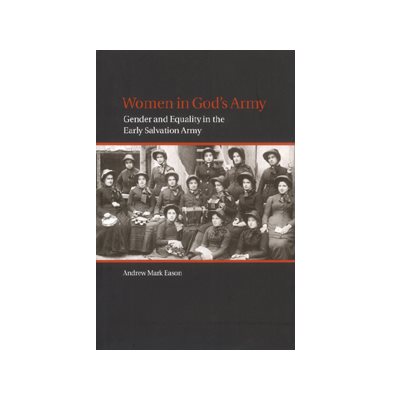 Gender and Equality in the Early Salvation Army

The early Salvation Army professed its commitment to sexual equality in ministry and leadership.  In fact, its founding constitution proclaimed women had the right to preach and hold any office in the organization.  But did they?

Women in God's Army is the first study of its kind devoted to the critical analysis of this central claim.  It traces the extent to which this egalitarian ideal was realized in the private and public lives of first – and second-generation female Salvationists in Britain and argues that The Salvation Army was found wanting in its overall commitment to women's equality with men.  Bold pronouncements were not matched by actual practice in the home or in public ministry.

Andrew Mark Eason traces the nature of these discrepancies as well as the Victorian and evangelical factors that lay behind them.  He demonstrates how Salvationists often assigned roles and responsibilities on the basis of gender rather than equality, and the ways in which these discriminatory practices were supported by a male-defined theology and authority.

He views this story from a number of angles including historical, gender and feminist theology, ensuring it will be of interest to a wide spectrum of readers.  Salvationists themselves will appreciate the light it sheds on recent debates.   Ultimately, however, anyone who wants to learn more about the human struggle for equality will find this book enlightening.

Andrew Mark Eason is a PhD candidate in Religious Studies at the University of Calgary and is writing a dissertation on Salvation Army foreign missions from Britain to India and southern Africa.