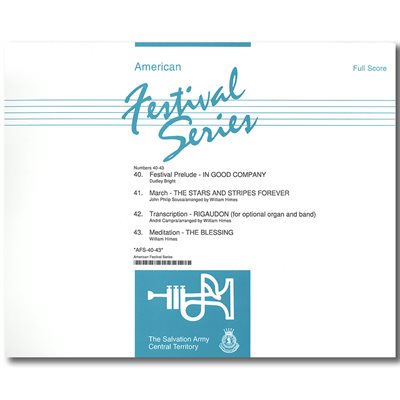 Program Note:
The old and the new are presented in this delightful merger of the contemporary chorus, "Lord, I lift your name on high" with "Pastime and good company" by Henry VIII. It is arranged in the Baroque concerto grosso format featuring cornets, trombones and percussion.

Note to the Conductor:
This music was conceived with visual performance in mind. Divided solo cornets and trombones form a concertante group that can be placed separate (antiphonally) from the rest of the band. In their solo sections they are accompanied by a Renaissance-type drum. For practical purposes the composer suggests one or more snares or tenor drums with snares off.

The concertante passages are based on the 16th century song of King Henry VIII, "Pastime with good company," and contrasted by full band in the contemporary worship song, "Lord, I lift your name on high." by Rick Founds. It is important to keep separate the distinct character of these two themes. This is achieved by observing the sudden changes of style and dynamics throughout.

41. March - The Stars and Stripes Forever

Program Note:
John Philip Sousa's most famous composition was written on Christmas Day, 1896. Sousa and his wife had been on vacation in Europe when they learned of the death of his band manager, David Blakely. While on the steamship journey home, he heard "the rhythmic beat of a band playing within my brain. It kept on ceaselessly, playing, playing, playing. Throughout the whole tense voyage, that imaginary band continued to unfold the same themes, echoing and re-echoing the most distinct melody." Sousa committed the notes to paper on arrival in America, where it was an immediate hit and was featured in virtually every Sousa Band program. The composer conducted it for the last time on the day he died, March 6, 1932.

Note to the Conductor:
For more than a century this march has been published in just about every conceivable form, yet I have found that most brass bands resort to performing from the concert band parts and adapting from woodwind parts (especially piccolo!) as needed. This caused me to wonder, how would Sousa orchestrate this if he were doing it specifically for brass band? Hence, this straightforward transcription with careful attention to maximizing the unique timbre and idiom of an all-brass band.

Strive for the subtle details that can often be overlooked in a very familiar piece such as this, including the following:

Bars 54-85 (trio): Note the breath accents that have been added to the melody (flugel, horns, euphonium) to emphasize the non-harmonic tones within the melody. These should be executed with subtlety and understatement.

Bars 110-142: It is traditional to have the soprano cornet stand for this solo. The usual admonitions apply here pertaining to a light melody with a transparent accompaniment.

Bars 164-165: The ritardano is optional and may be used at the conductor's discretion to add a little extra drama to the grandioso final strain.

Percussion: To state the obvious, the snare drum should strive for a classic march style throughout, using the given flams and 5-stroke rolls to reinforce the after beats in horn and baritone parts.

Program Note:
Throughout his music career in Paris, André Campra (1660-1744) composed a number of successful operatic and theater works, of which Rigaudon is popular to this day. Because of its joyful and majestic quality, it is frequently heard at weddings and other significant ceremonial occasions.

Note to the Conductor:
This brief but well-known work of André Campra is provided with the optional interplay between brass band and organ. That said it is equally effective when performed with brass band alone as care as been taken to exploit contrasting timbres when playing the organ cues

This transcription is not technically challenging and should sound quite convincing as long as bands strive to emulate the beautiful sustained sonorities of the might pipe organ. Think cathedral!

Program Note:
First written as a processional for the wedding of the composer's son, the music is based on his favorite hymn, "Come, thou Fount of every blessing" by Robert Robinson (1735-90). The music expresses solemnity, tenderness and majesty and builds to the sweeping grandeur of the bridal entry, coinciding with the text of the final verse: "Here's my heart, Lord, take and seal it. Seal it for thy courts above."

Note to the Conductor:
Because this music was first used as wedding processional one can anticipate the majestic character of this meditation. Two major influences in this work are the hymn's inspiring words and melody and an attempt to emulate the noble lyricism of the 20th century English composer, Gustav Holst (1875-1934.)

Regardless of indicated dynamics or articulations, the overall objective should be to produce a beautiful and glorious sound of praise and celebration.

Other specific considerations are as follows:
Bars 22-44: The hymn tune's first statement (baritones, euphonium) provides an example of text painting (using music to reinforce word pictures.) In this instance the flowing triplets (solo cornets) emphasize the opening phrase, "Come thou fount of every blessing." This "fount motif" is later tossed around to euphonium and trombones, then back to cornets. The objective must be smooth execution with rhythmic integrity.

Bars 67-74: The second statement of the tune again features some watery imagery, this time a tranquil ripple (2nd horn, baritones) with a slight emphasis on non-harmonic tones (as indicated by tenuto marks), gently supporting the melody in flugel, solo and 1st horn.

Bars 90-end: Observe the poco stringendo, with a hint of pressing ahead. Although the music reaches a peak at 98, carefully modulate the intensity of this moment, taking care not to give it all way until the ultimate peak bar 119. Bars 123 to the end are all about sonority and celebration.