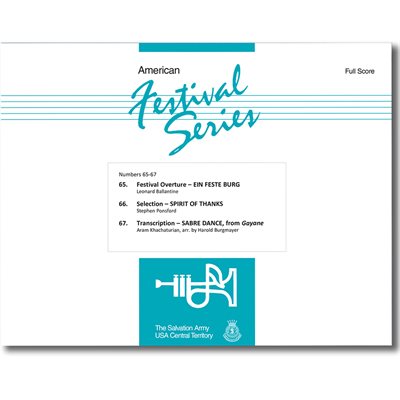 This edition of American Festival Series brings together three bright selections useful for any brass band. The Festival Overture — Ein Feste Burg by Len Ballantine breathes new life into Luther's well-known hymn as a sparkling opener. Stephen Ponsford's Spirit of Thanks, written for the USA Central Territory Youth Band, will prove especially useful for harvest and thanksgiving occasions. The scintillating Sabre Dance from the ballet Gayane by Aram Khachaturian, as transcribed by Dr. Harold Burgmayer, is a real crowd-pleaser.

Note to the Conductor
Beginning to bar 9: The triplets in the 12/8 introduction are marked staccato and should be rendered short, except when an accent is indicated. In contrast, the duple figures, for instance in bars 5-7, are marked with accents and should have full length. Establishing the tempo moving from the opening timpani to the cornet figuration is vital. At bar 7, grade the sudden shifts in dynamics.

Bars 9-24: Commencing at bar 9, the initial presentation of the chorale melody Ein Feste Burg should be well sustained and full of sound, supported by a moving bass line. Note that the downbeat pedal tones from basses and euphonium at bars 9, 14, 15, 18 and 19 are accented, and to be played at a full dynamic. At bars 14 and 19, the remainder of the band swells from a softer mezzo forte dynamic with staccato triplets. Retain a full dynamic and the tempo until the rallentando at bar 24.

Bars 25-51: At bar 25, a second presentation of the choral melody, now in 4/4 time, requires a measured slower tempo played in a contrasting tranquillo style. Maintain forward motion in tempo, while enjoying the rich sonorities and observing the phrase markings for proper breathing. Note the quiet triplet figurations that bridge the chorale phrases and how the upper register 1st Trombone melody commencing at bar 35 is reinforced by the flugelhorn. An affirmative closing phrase transitions into a bright fanfare section in 3/4 time at bar 45. Be sure to return to the preceding (listesso) tempo following the slight rallentando.

Bar 52 to end: At bar 52, the tempo suddenly shifts forward with the return of the introductory trumpeted triplets. Observe the sudden dynamic shifts at bars 56-57, growing into a dramatic allargando conclusion. Like the introductory bars, remind the players that accented duple eighths have length, while the triplet eighth notes are marked staccato.

Selection — Spirit of Thanks

Note to the Conductor:
Introduction: Establish a bright, driving tempo at the outset. Note that there are three distinct percussion parts. Maintain a steady tempo, particularly with the syncopated references to the refrain "Forever God is Faithful," occasionally across bars in mixed 4/4 and 3/4 meters. Pace the molto rallentando coming into bar 29.

Bars 29-46: At bar 29 a complete rendition of Come, Ye Thankful People, Come passes between instrumental sections in conventional harmonies. Be sure that the hymn tune is consistently in the forefront. At bar 45, a ritardando precedes the new tempo at bar 47.

Bars 47-55: At bar 47, note that the tempo is to be spirited and quicker than the opening. Again, there are references to phrases from the song Forever. In bars 51 and 52, bring out the pyramid that moves progressively from euphonium to 1st baritone to solo horn and then to flugelhorn.

Bars 56-67: A full presentation of the verse and chorus of Forever features various effects in the accompaniment. For example, over bars 64 to 67, strive for equal voicing across the fortepiano effects in the cornets, as well as a flowing ascending arpeggio in the mellow instruments. Caution basses and trombones to hold off making any crescendo for a full bar after the fortepianos.

Bars 68-101: A brief drum break over two bars of 3/4 time precedes a second fuller presentation of the worship chorus at bar 70. Bring out the imitative elements that help build to a rousing setting of the refrain, "Forever God is faithful" at bar 86. Maintain a steady backdrop to the offbeat syncopation of the main melody.

Bars 102-122: There is an important drop in dynamics to mezzo piano at bar 102 featuring solo horn and flugelhorn. After the buildup in volume, return to this same soft dynamic again at bar 112, this time bringing clarity to the euphonium, followed by solo horn, over a syncopated backdrop that builds steadily.

Bars 123-148: From bar 123, a full-bodied presentation of Come, Ye Thankful People, Come ensures a forte dynamic. The conductor may opt to shift to two-beats-to-a-bar with the tune expressed in a half time feel. Be sure the chorale melody in the 1st cornet, flugelhorn and trombones is more prominent than the driving solo cornet/euphonium countermelody based on Forever.

Bar 149 to end: Save some energy and sound for the climatic final phrase of the hymn at bar 149. Then observe the sudden mezzo piano for full band at bar 153, bringing out the closing references to both songs that follow. The final bar calls for an offbeat fortepiano leading to a well synchronized final beat three.

The Sabre Dance is from the final act of Aram Khachaturian's ballet, Gayane, written in 1942. As one might expect, the dancers display their skill using sabres.

This frenetic melody is one of the catchiest, most familiar — perhaps maddening — tunes of the 20th century, even becoming a jukebox hit in 1948. One single version of the Sabre Dance was the first million-selling record of the Chicago Symphony. The tune has since found its way into cartoons, TV, films, video games, as accompaniment to figure skating routines and the anthem for the Buffalo Sabres hockey team.

Aram Khachaturian was born in Armenia and the Armenian folk influence is unmistakable, especially with the waltz interlude midway through the piece, based on an Armenian wedding dance.

Note to the Conductor:
Arrangements of the Sabre Dance are available for many different kinds of instruments and ensembles, sometimes with tremendous differences in harmonic and rhythmic treatment, particularly with the bass line. With this in mind, this arrangement takes liberties primarily to help the piece successfully work for the brass band.

Beginning to bar 24: A brief two-bar introduction sets the dance in motion. The conductor may opt to shift to two-beats-to-a-bar at bar 3, once the quick tempo is established. In general, the approach to all notes is detached with accents as indicated. A strong downbeat pulse is essential with the bass line in basses and bass trombone. A hallmark of this selection are the bold trombone glissandos.

Bars 24-54: The transition into waltz time at bar 24 maintains the lively quarter beat pulse. Elect to conduct in three or in one. Be sure the bass line (across the bar making a four-beat pattern) and the offbeat accompaniment (in trombones, and later at bar 40 in baritones) keep a steady pace. After the static quality of the opening theme, take advantage of the shapely Armenian wedding melody in horns and baritones at bar 24, and later, in the backrow cornets and euphoniums at bar 40. Utilize a wide range of dynamics and give good attention to the ornaments and placement of various accents. Solo cornets add a countermelody at bar 40.

Bars 55-66: The time signature shifts back to 4/4 time, again maintaining the pulse in a lively interlude, perhaps best felt in two-beats-to-the-bar. For the full effect, overemphasize the sudden dynamic contrasts. Note the clamorous exchange at bar 65 between the trombone section and the baritones and euphoniums before the quick re-entry into the opening theme at bar 67.

Bars 67 to 92: The opening theme returns at bar 67. There are no differences from the music at bar 3 until the interlude at bars 76 to 80, featuring syncopated exchanges between sections supported by prominent temple blocks. The music at bar 81 is identical to the second episode found earlier at bar 14 until bars 89 to 92, with a chain of exchanges of descending scales in cornets and euphoniums and the trombone glissandos.

Bar 93 to end: To conclude, different sections render descending chromatic scales in triads, moving collectively from fortissimo to piano. Strive to get even softer still with the angular octave leaps that follow, before the sforzando final chord.