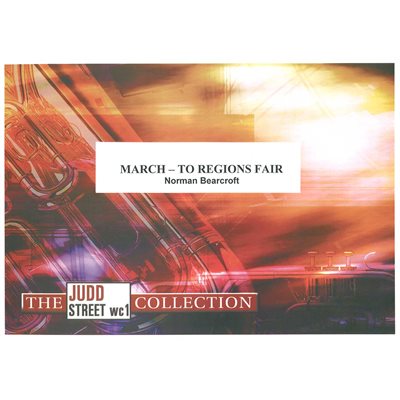 When this march was published in March, 1958, it was only the second contribution of then-Captain Norman Bearcroft to appear in The Salvation Army band journals. It remains one of his most enduring works.

Introduction — Cornets and trombones open with a fanfare-like figure with the full band entering on the last quaver of the second bar. This entry must be firm, but not overblown.

Section A — A feature of this section is the three-part-harmony nature of the theme which is imitated by the tenor trombones. The groups should be well-balanced and crisp in style. Observe the crescendi appearing in bars 11 and 17-18 and ensure a reversion to mezzo forte as indicated.

Section B — This section is straightforward. The countermelody should not be over-prominent. In bars 34-36 the accents should be well marked but not overemphasized.

Section C — All is on normal lines. The bass solo should come out well if all notes are given full value. The semiquaver groups three bars before the fine must be confidently delivered. Note the accents in these bars and distinguish the martellato accents in the final bar.

Section D — With the key change to Bb major, the song Meet in bliss is given to flugel, solo and 1st horns. From bar 69 the soprano and 1st cornet join to strengthen the melody; solo cornets enter eight bars later to complete it.

Section E — This section will probably need a little extra rehearsal. In the second bar the accent falls on the second and fourth quavers for 2nd cornet, horns, baritones, tenor trombones and side drum, whilst the remainder of the band accents the second beat of the bar. Care should be taken in the sixth bar where triplet quavers are shown.

Section F — The chorus of Meet in bliss is repeated, the melody being given to the soprano, 1st cornet and upper horns, above which solo cornets have an interesting counter-theme of florid design. Against all this 1st baritone and euphonium provide additional contrast with song-like countermelody.