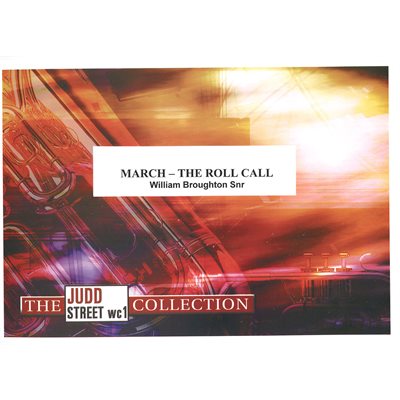 Written in his well-known style, this march, by Brigadier William Broughton, derives its title from the chorus of the song When the roll is called up yonder, I'll be there, which is incorporated therein.

The introduction is quite in keeping with the subject, a fanfare being given for cornets, extending for a period of four bars. This must be played in real bravura style, and with due regard to the question of intonation. A figure of this character looks simplicity itself, but for a group of players to accomplish it in a unified style is an entirely different matter. Note the diminuendo in the last bar, and see that the force of sound is gradually reduced up to the beginning of the first subject at letter A.

A light, tripping style is demanded throughout section A, the principal theme being allotted to upper cornets. Note the use of accents here and there, and see that these are intelligently given. The tendency in some quarters is to strike heavily at such notes, without and regard to musical sound. In this present case the notes should be treated more as 'pressure' notes than of the martele type. Nothing of unusual difficulty will be met with in any of the parts, and the whole should soon shape up.

In many ways the second subject at letter B, resembles the preceding section; particularly does this apply rhythmically. It will also be seen that the accents referred to in the previous section are given in quit a number of instances. The remarks previously made governing these apply here also. Due observance should be made of the type dynamics operating here, and note that these are placed differently from those at letter A, the forte in this case being for the first four bars, followed by mezzo forte, and then again forte.

The chorus referred to in the earlier part of these notes makes its appearance at letter C. This is used as a bass solo, and n this form comes out really well. Fanfare-like figures, in the main, are given to the upper marts in the 'trumpeting' section, but a special part, given to 1st and 2nd horns, will be observed. This is of quite an independent character and possesses a few features, the chief being bell-like figures where accents are given. 'Snappy' playing should characterize the last four bars which are given in the nature of a coda.

Without introduction, the trio subject appears at letter D, and again this is similar in style to the preceding subjects. All is straightforward and will be read almost at sight by most bands.

Quite a big contrast is provided at letter E, where the episode is given. Strong, bold chord work is allotted to full band throughout. Many accents are also used and these are more of the explosive type. Guard against over-blowing here; aim at a big tone rather than mere noise.

A return is made to the trio subject, and with the usual D.C. the march concludes.
(view series guide)
Produced by The Salvation Army, SP&S, UK